The Merge is scheduled to happen on September 15th, and the event is set to transition Ethereum from the energy-intensive proof-of-work algorithm to a more eco-friendly proof-of-stake.

However, some ETH miners, led by Chandler Guo, intend to keep mining Ethereum on a proof-of-work network post-Merge. To achieve this, they will have to carry out a hard fork as soon as the Merge is complete.

What is a Hard Fork?

A hard fork is a permanent divergence or separation of the blockchain into two or more versions. It is often known as a chain split because the resulting paths follow a different set of rules from the original. Hard forks are often the result of a network upgrade agreed upon by its participants: miners (proof-of-work chains), node validators (proof-of-stake chains), and community members.

Sometimes the participants agree to follow only one version of the blockchain after the chain split. But, on some occasions, they decide to follow different paths, as was the case in 2016 with Ethereum Classic after the $150 million DAO attack.

The planned Ethereum PoW hard fork is somewhat similar to the Ethereum Classic chain split because its proponents believe in continuing the mining of a proof-of-work version of Ethereum. A complete transition to proof-of-stake would mean that the hundreds and thousands of ETH mining machines will now become obsolete, and miner revenue will go down to zero.

ETH mining activities generate billions in revenue per year. Research by the team at Arcane Research states that ETH miners have so far made $11 billion in 2022 and $18 billion last year. Therefore, a chain split is one way of keeping the mining machines operational and profitable for Ethereum miners worldwide. 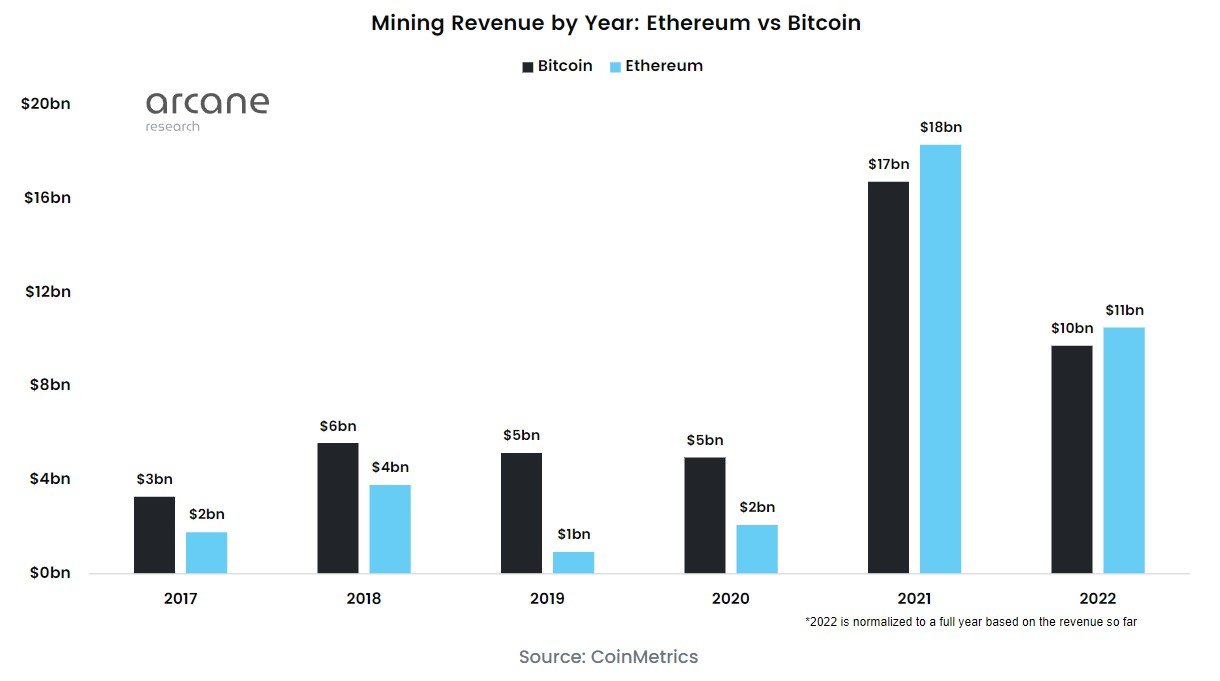 Plans of the Ethereum PoW Team as the Merge Approaches

The team that intends to carry out the hard-fork post Merge, @EthereumPoW, has constantly been updating the crypto community on its plans. The team has so far announced the following:

In terms of supporting the hard-fork, the following notable crypto exchanges have pledged their support and listing of the new cryptocurrency. Most, if not all, have already started trading tokens representing two potential new assets post-merge: Ethereum PoS (ETHS) and ETHW.

Some prominent crypto exchanges have opted for the safer route of first watching whether the hard fork will occur and then distributing the resulting ETHW. The exchanges will review the new token for listing using their internal processes before availing of ETHW for trading. Withdrawals of ETHW will likely be activated once the chain is stable.

Below is a list of crypto exchanges with such a plan.

Crypto Projects That Will Not Support the Hard Fork

At the same time, some believe that a proof-of-work hard fork is not in line with the Ethereum community’s vision for a complete transition to the less energy-intensive proof-of-stake algorithm. As a result, they have announced that they will not support any hard-fork post-merge and the resulting new digital assets such as tokens and NFTs.

How to Get the ETHW Airdrop

The possibility of earning free ETHW digital assets due to holding ETH as the Merge approaches is enticing for any crypto investor. Therefore, the following is recommended.

As with all significant events in the crypto-verse, the potential hard fork post-Merge has caught the attention of scammers, enticing Ethereum holders to send them their ETH to guarantee a smooth transition to proof-of-stake and maximum returns on the ETHW airdrop.

Therefore, investors and ETH holders must only trust a major crypto exchange and wallet with their Ethereum before and after the Merge.

Doubts Remain About the Long-Term Viability of Ethereum PoW

Also worth mentioning is that hard forks are usually a dangerous undertaking. The new chain can undergo a 51% attack resulting in double-spend transactions and other malicious actions.

The new Ethereum PoW chain will be vulnerable to malicious attacks in the first few hours and days of its existence. Miners will have to work hard to maintain its stability post-merge.

In addition, the long-term existence of Ethereum PoW depends on crypto projects, decentralized applications, and users migrating to the new chain. Ethereum PoW has a challenging task of attracting and maintaining them over time, particularly with a majority supporting the PoS transition or alternatives such as Ethereum Classic.