The Ethereum network has undergone several upgrades since its launch in 2015. All the upgrades have had a single mission in unlocking Ethereum’s full potential, and the Merge event is no different.

What is The Merge?

As the name suggests, the Merge is the coming together of the current Ethereum mainnet (execution layer) with its new proof-of-stake consensus layer known as the Beacon Chain. The Merge will mark the beginning of Ethereum’s transition from the energy-intensive proof-of-work algorithm to the less energy-demanding proof-of-stake.

The transition to proof-of-stake also means that Ethereum can efficiently juggle the scalability trilemma by being able to scale, becoming more secure and decentralized. Achieving these three goals as a proof-of-work network would have been extremely difficult for Ethereum.

What is the Beacon Chain?

Launched in December 2020, the Beacon Chain allowed Ethereum users and developers to start interacting with a proof-of-stake environment by staking ETH or running a consensus client to secure the network.

When is the Ethereum Merge?

The Merge has been years in the making. It is expected to happen on September 15th, 2022. But this should not be considered a stiff deadline as its execution depends upon several factors, such as reaching the expected block height of 15,540,293 and a target Terminal Total Difficulty (TTD) of 58750000000000 on the proof-of-work chain.

Once the TTD threshold is reached, no additional proof-of-work blocks will be produced. TTD also reduces the probabilities of potential attacks where a malicious actor directs the hashrate to a forked chain. 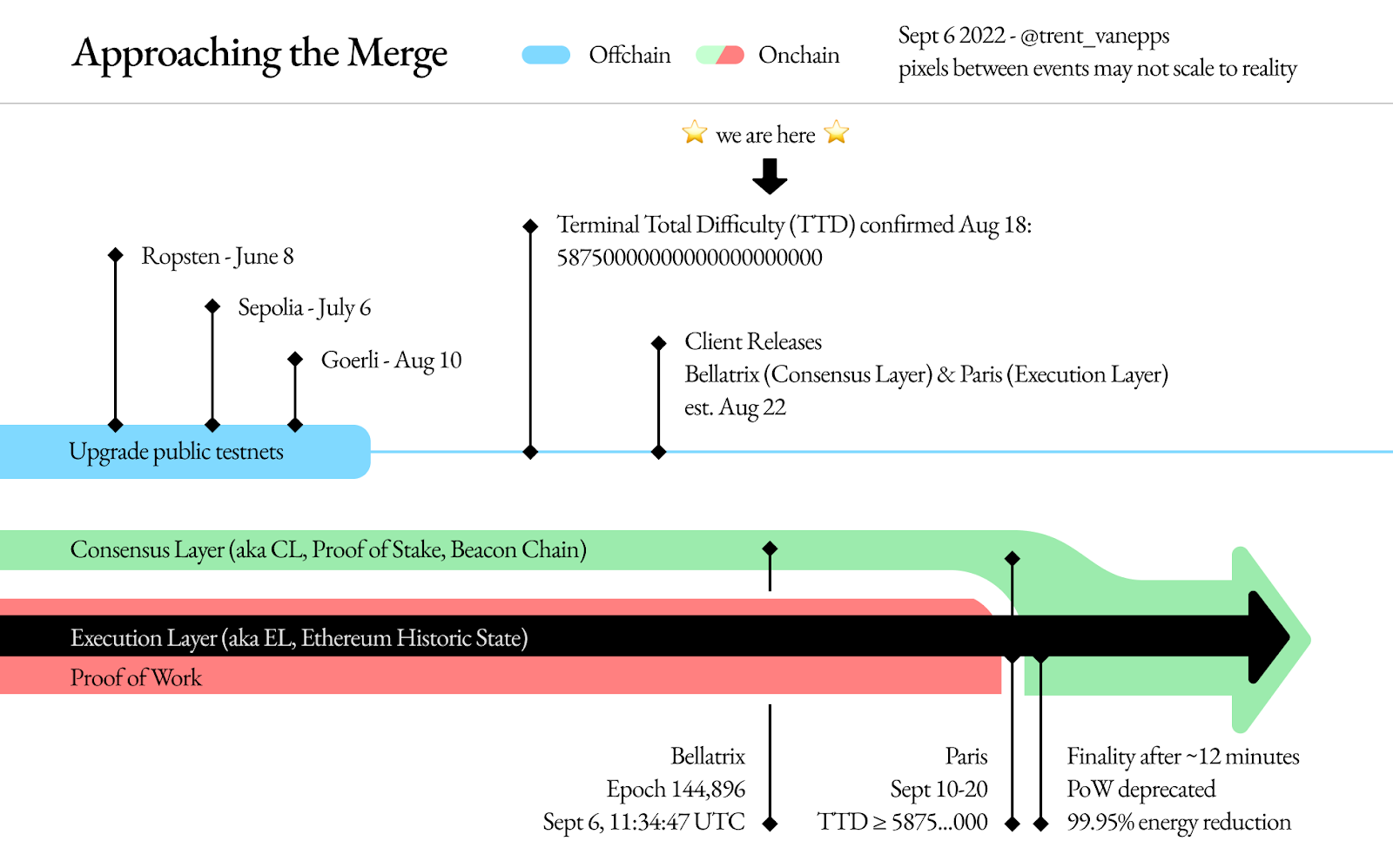 Stages and the expected timeline leading up to the Merge. Source, @trent_vanepps

Do Ethereum Users and Holders Need to Do Anything Ahead of the Merge?

Ethereum users, holders of ETH and other tokens on the network, and non-node operating stakers do not need to do anything with their funds or wallet before the Merge. The transition to proof-of-stake is designed to be seamless.

Most crypto exchanges, crypto wallet providers, and DeFi protocols have already issued statements on how they intend to handle the Merge, including the temporary suspension of deposits, withdrawals, and smart contracts in the case of DeFi.

Ethereum holders and users are also requested to be on high alert for scams targeting users' funds with false instructions, such as a need to send your ETH or ERC20 tokens to a specific address to participate in the Merge.

Common Misconceptions About the Merge

The transition to a proof-of-stake algorithm is a big event for Ethereum, and the complexities have led to several misconceptions about what the Merge will accomplish. Below are the most common misconceptions within the crypto community.

What About Potential Ethereum Hard Forks and Airdrops Post-Merge?

As with all blockchain projects, not every Ethereum community member believes a transition to a proof-of-stake is the right path for the network. Consequently, some community members, particularly miners, may continue to run a proof-of-work version of Ethereum after carrying out a hard fork.

Therefore, holders of ETH might be eligible for subsequent airdrops resulting from chain splits. The distribution of such digital assets will be at the discretion of crypto exchanges and wallet providers.

Ethereum’s Planned Upgrades After the Merge

The successful transition of Ethereum to a proof-of-stake network after the Merge is just the first stage of a five-part roadmap intended to improve the network in terms of scalability and decentralization. The other four future stages include.

The Ethereum network continues to evolve to become more scalable, decentralized, and secure. The Merge is the first of five major upgrades in an intensive Ethereum improvement roadmap outlined by Vitalik Buterin in December 2021.

The Merge is designed to happen seamlessly without any downtime. It might result in chain splits due to community members having a different long-term vision for Ethereum. Only time will tell whether these new chains will remain relevant and operational down the road.