On September 28th, the United States Securities and Exchange Commission (SEC) announced that it was charging The Hydrogen Technology Corporation, its former CEO, Michael Ross Kane, and the CEO of Moonwalkers Trading Limited for their roles in carrying out the sale of an unregistered securities offering of the Hydro Tokens.

The SEC further charged them ‘for perpetrating a scheme to manipulate the trading volume and price of those securities, which yielded more than $2 million for Hydrogen.’

In particular, the SEC pointed out that beginning in January 2018, Mr. Kane and Hydrogen publicly distributed the token through various methods, including airdrops, employee compensation, bounty programs that paid the token to individuals who promoted Hydro, and direct sales on crypto exchanges.

The SEC added that Mr. Kane and Hydrogen Technology hired Moonwalkers in October 2018 ‘to create the false appearance of robust market activity for Hydro.’ Moonwalkers used its customized trading software or ‘bot’ to achieve this. The trading company then sold Hydro and artificially inflated the market for profit on behalf of Hydrogen, which reaped the mentioned $2 million in profits.

Market Manipulation is Common, Especially by Retail Traders Who Use Sniper Bots.

The market manipulation charges by the SEC highlight an often unscrutinized practice in the crypto markets of trading companies and even retail traders, utilizing software in the form of bots to influence the price action of cryptocurrencies and NFTs in their favor.

Sniper bots are one example of trading software common in the crypto and NFT trading platforms. As the name suggests, the bot lurks in the background, observing the order books and waiting to submit information for an order at the very last moment, thus reducing the chances of other traders responding to the almost instantaneous action.

Their operations are time-based, and the bots can be automated, allowing traders to concentrate on other tasks as the software does all the trading for them.

These bots were initially common on auction sites such as eBay for last-minute bidding but have found a new use case in the crypto and NFT trading platforms which are often decentralized with minimal oversight from a central authority.

A trader with a software background can create a custom sniper bot, but there exist ready-made ones for sale. Some traders hire a developer to create one according to their specifications.

What the sniper bots are essentially programmed to do is front-run trades in a bid to extract more value from the digital asset. The bots use publicly available information in trading mempools (memory pools) to perform their logic calculations before carrying out their orders.

The OMNIA protocol addresses this by offering front-running protection to prevent bots from accessing the key information needed to get ahead of other traders. OMNIA does this by leveraging private mempools, which are private endpoints between users and miners. Private mempools are a paid service and prevent bots from figuring out which transaction to exploit. To have access to this these mempools and additional benefits, one can go to app.omniatech.io and generate a secure endpoint to use in his wallet.

OMNIA is Committed To a Fair Token Launch With Minimal Risks

Concerning OMNIA’s token launch, the team is ironing out the final details with DAO Maker to guarantee a seamless experience for all participants and reduce the chances of external market influences through sniper bots when the token goes live.

The OMNIA team has also devised mitigation measures to increase the chances of a fair token launch and combat sniper bots common on decentralized exchanges.

The infographic below summarizes OMNIA’s mitigation measures catering to the token launch. 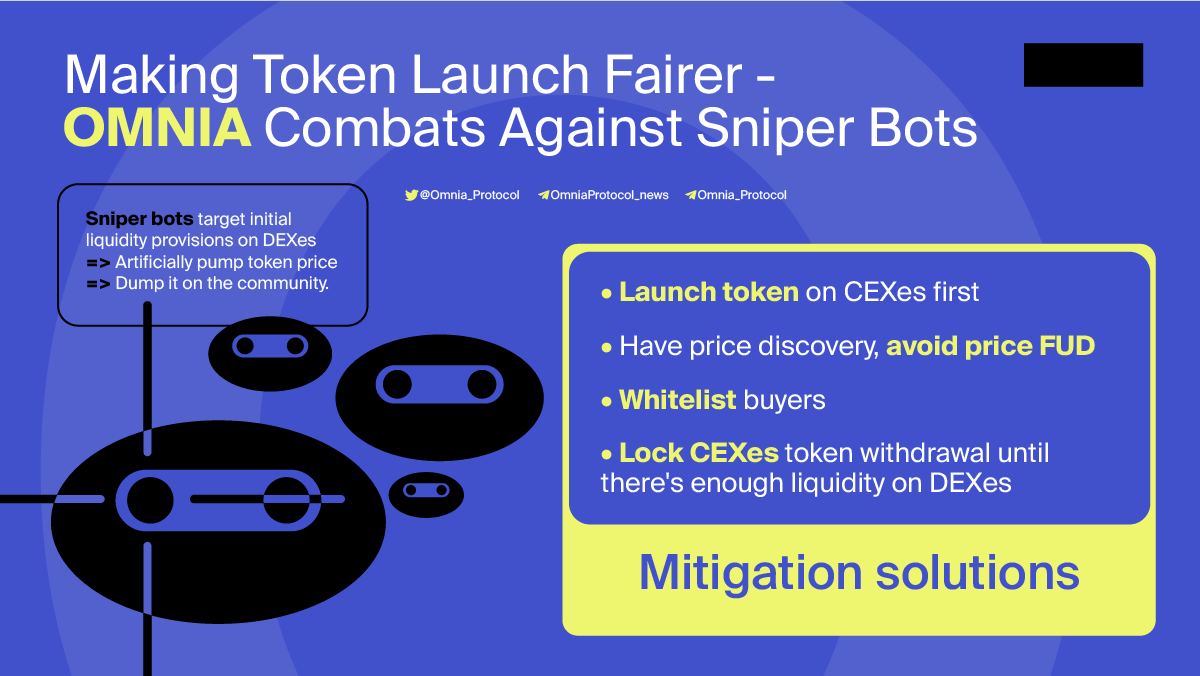